As a real estate brokerage team, we help people buy and sell homes. Sometimes this can be a real emotional roller coaster for them and therefore as part of our job we are tasked to help smooth out the process as much as possible. We are there to lend an ear and then sometimes shoulder a good helping of that emotion right alongside our clients. Hence, the best real estate brokers are always people-people as much as a process-people. On top of that, buyers and sellers are not the only ones that need hand-holding. Large transactions, like a home, involve a lot of people and a lot of process. A broker coordinates with, and yes, sometimes hand-holds, contractors, lenders, inspectors, government officials, and more.

For us this has led to a growing list of friendships over the years—a list that is particularly eclectic since, as you could probably guess, everyone from every walk of life buys or sells a home at some point in their lives.

Last night we attended the housewarming party (and birthday celebration) for one of our clients, a client who had their own share of emotional turmoil throughout the process, but with whom we really hit it off.

We showed up at 4pm for the party on a Saturday evening, which was perfect for us. (We're getting older and when the sun-goes down . . . well, let's just say we don't put on the dancing shoes very often anymore.)

The food was great. The guests were tremendous. And it turned out a bunch of them went to high school together, which was pretty neat considering our high school friends live far far away (save one, "Hey, Karyn!").

The night wore on with Todd trying his best (unsuccessfully) to pry embarassing, or at least funny, stories out of these people who clearly know each other very well. That was when the karaoke started up.

Now, at any party when karaoke cranks up, a number of things will happen. A chunk of the group will immediately attempt to run away, while the remainder cower in the corner. But there will always be a small contingent of brave fools (er, brave souls) who step forward with a devil-may-care look in their eyes (usually lubricated by an adult beverage) and confidently grab the microphone. One or two people will kick things off with a rendition of John Denver, Cher, Eninem, or the Eagles. One person will clearly be "the great singer" while the others will be merely enthusiastic. At this point, there will come a uncomfortable moment where these over-confident singers will harass the folks cowering in the corner. The corner-dwellers will defer, cower some more, defer, and then one will eventually cave with, "Fine. Okay, damn it. I'll sing."

We were among the crew that cowered in the corner. But we knew we were in for something special. You see, one of the homeowners sings opera. Like . . . The Four Tenors; loud Italian and all that; opera. We were thinking, they want to karaoke and here's a dude that loves opera. We could be in for something interesting.

Geez, folks! Did you know (we didn't) that you can now browse YouTube, search for "opera karaoke" and WHAM!, you get opera with sing-a-long lyrics! You can do this for anything now. Who knew?

Anyway, our new friend did not disappoint. Before we knew it, he was belting out something rather impressive in Italian (we think it was Italian). It should be noted that prior to this—and this is going to make us sound like old fogies—a bunch of them were singing to hip hop where the lyrics and melody were indecipherable to us but obviously not to them. We should add that the average age of this crowd was 10 to 15 years younger.

So, there he stood, owning the room, our client and new friend, belting out something in Italian. Impressive to the end. The next song was queued up and . . . Wait, what? A duet? Our host for the evening and one of the guests stepped right into an operatic duet. Surreal.

And they were good! Like, really good. We were floored. We knew that people have all kinds of diverse interests, and sure, a love for opera is not all that uncommon, but we think it'd be safe to say that the percentage of the population that can actually sing opera is relatively small. Multiple people? At the same party? Performing opera-karaoke? Very very uncommon.

The two opera singers sat down. Acting all like, "this is just normal karaoke and who's next?" Yeah, right. Who could follow that? we thought. But then the next karaoke singer stepped up, more or less expressed the same nervous sentiment, and then . . . she too sang opera! What?

Now, we thought, okay, either (a) we were being punked, (b) we stumbled upon a coven of opera-witches, (c) opera was the new craze and we were just unaware, or (d) the high school and opera connection was not mere coincidence.

Side note: We did look for the rock we may have been hiding under and didn't really find it. Maybe because we should have looked up?

As compelling a story as stumbling upon a coven of opera-witches would be, possibility "d" was the right answer as you probably guessed. It turns out these high school pals attended a school that offered opera as a musical elective. Twenty years later, they still get together and sing occasionally. How incredibly cool is that! Hey teachers, pay heed: your influence lasts a lifetime.

Needless to say, we did not even attempt to join the operatic sing-a-long (nor the hip-hop sing-a-long for that matter), but Monica did perform a beautiful rendition of "Blue" (LeAnn Rimes). Monica has a wonderful voice. Todd, on the other hand, has a singing voice that is the opposite of wonderful and did not want to sully the vibe, so he stayed planted well within the safe confines of the corner of the room. Hearing Todd's voice would be like finding a fly in the wedding soup.

The party continued like nothing unusual happened. The fact that opera happened was hardly acknowledged. But then, we suppose, an evening like this was not unusual for these folks.

What a lovely and surprising evening, and in the process we made some new friends. It really served as a reminder that the world is a diverse and interesting place. This job in particular puts you in contact with so many great folks that leave you with a lasting impression. What a night. Get out there and take an interest in other people. You too may stumble on a coven of opera-witches in the process. 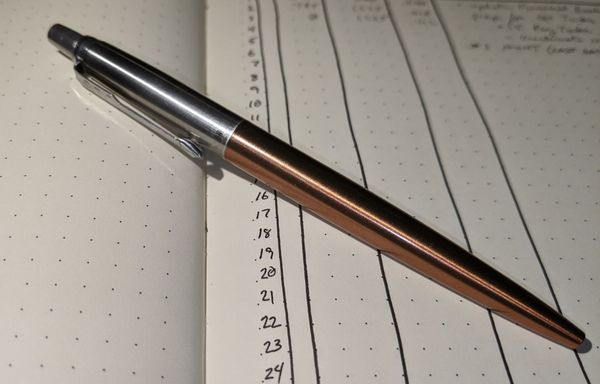 The Bullet Journal Method is a simple, straight-forward, highly-effective, flexible methodology for bringing order to your life. Let me walk you through my basic setup for 2020.